The giraffe of the alphabet 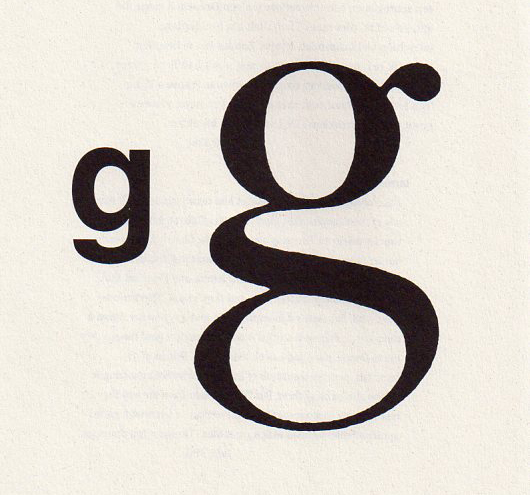 This, from Gerard Unger’s Letters, a collection of texts from a newspaper column ‘Letter en Geest’ contributed to an Amsterdam newspaper between 1989 and 1990:


The g is the most beautiful letter in the alphabet. Not the one on the left, the one on the right. One with an eye and a loop, the other with two eyes, or an eye and a loop. But what do I mean by letter g? Sometimes so hard, as in German, sometimes so soft, as in can be in French — and certainly not the sound that g gerenerally represents in Dutch — that cross between a cough and a gargle that foreigners find so difficult and ugly. And what does beautiful mean? It is a word that we are capable of using totally blindly, and with perfect conviction. Compare: one of the most amazing creatures of the animal kingdom is the giraffe. Certainly a trotting giraffe: with long knobbly legs, crossed and uncrossed again in wide sweeps — without becoming entangled. Above them, that long, long neck, slowly and regally inclined, then held erect again. Beautiful indeed. Pure beauty. A cause for boundless lyricism. And too, a giraffe has beautiful eyes and a beautiful coat. The g is the giraffe of the alphabet: an amazing creature surrounded by quotidian quadrupeds. Most of the small letters are simple combinations of these elements: arcs and straight lines (horizontal, vertical or sloping). Only the a, g and s escape this pattern, the g most of all. Strange is beautiful.